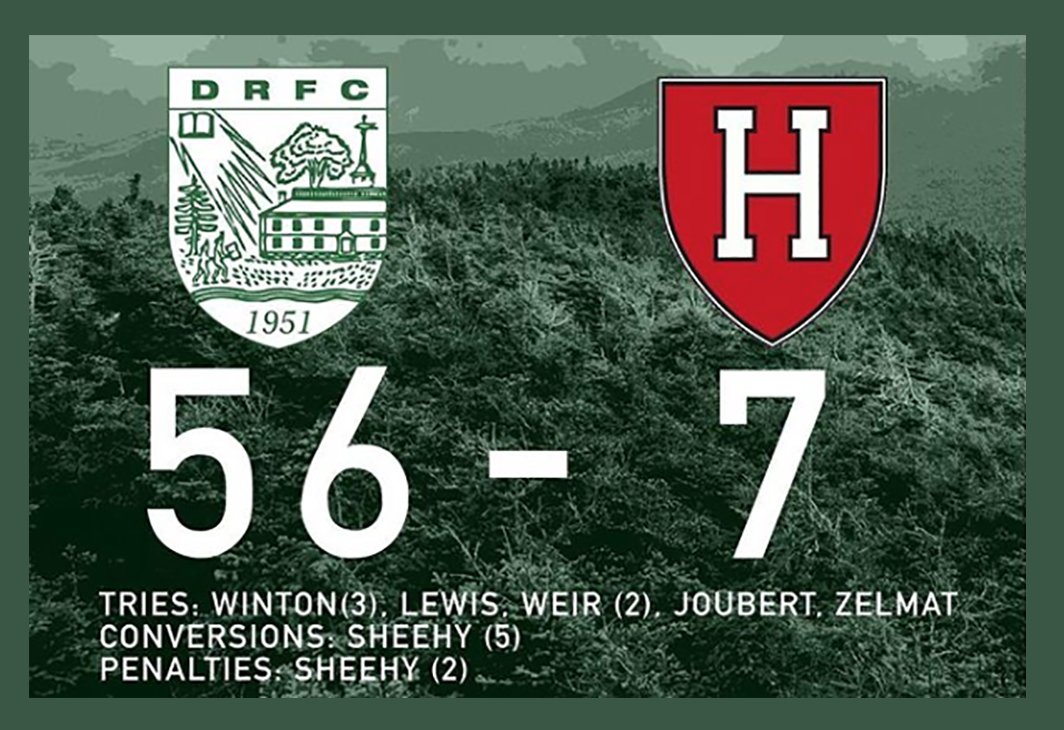 The DRFC traveled down to Cambridge on Saturday to take on Harvard in the latest edition of one of the longest standing rivalries in collegiate rugby.

Pat Sheehy opened the scoring with a penalty kick early on to give the Big Green a 3 – 0 lead. Hard work in set-piece play and relentless effort on defense kept the ball in Harvard’s half of the pitch for most of the match, allowing Dartmouth’s attack to set the pace. Fuller Winton ’19 (Co-Captain) led the Big Green’s scoring effort with an impressive hat-trick, scoring three tries in the first half. Winton’s performance was nothing short of outstanding, but he was certainly not working alone. His first try came off a big 10-on-10 hit from Jarett Lewis ’21, forcing a loose ball, precipitating the score. A strong scrum from the Green pack on Harvard’s 5-meter line would set the stage for the Co-Captain’s second 5-pointer, and Mike Weir ’22 offloaded to Winton in contact off another scrum on Harvard’s 22-meter line, which Fuller would run through the Crimson defense for his third score. Lewis started off the second half with a quick score of his own off a Green scrum a few meters out from Harvard’s try zone. For their fifth try, the Green pack leveraged its skill at the lineout, mauling to within a meter of the goal line and setting Weir up for a quick dive into the try zone. Shout-out to Struan Coleman ’19 (Captain) for his leadership in the set piece and Mason Koch ’20)for steering the maul with a hefty dose of Iowa power. A few minutes later, Weir punched in his second try, taking the quick tap off a penalty at the breakdown near mid-field and skating through most of the Harvard XV with a few shifty cuts and pass fakes. Not long after Weir’s show, the Big Green’s hustle from the defensive line paid dividends, with an interception from Will Shadek ’19 at the Crimson 22-meter line. The attack snapped quickly into shape, and Andrew Joubert ’20 scored Dartmouth’s seventh try of the day off a few quick passes through the hands. The DRFC’s final try of the afternoon came off a double tackle from Parker Hall ’20 and JM Seibert ’19, knocking the ball loose at mid-field. In a Fijian-style march down the pitch, the Big Green strung together eight passes, including two great balls from Hall and a 30-meter run from Pat O’Neil ’20, ultimately culminating in an offload from Joubert to Marwan Zelmat ’19 for the score. Sheehy nailed five conversions and two penalty goals from around the pitch, playing an important role in the DRFC’s scoring efforts as usual. Gyorgy Brevnov ’20 held down the wing with several big hits, shutting down Harvard’s attempts to move the ball into Dartmouth’s half of the park.

With the victory over Harvard, the DRFC’s Ivy League season is off to a strong start. The boys take on Cornell in Hanover next Saturday at 1pm on Brophy Field. Special thanks to all the alumni, parents and friends of the Club who made the trip out to Harvard this weekend to support the DRFC. The stands packed with green were yet another testament to the Club’s strength and its importance to all those involved.