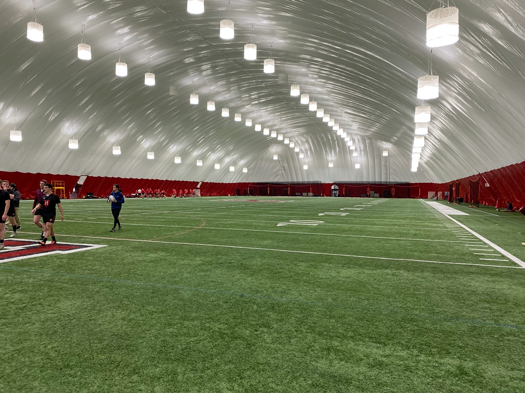 Brown traveled up to Harvard Stadium this weekend to test the waters with their spring 7’s squad. Invited on the day were Northeastern, Boston College, Brown and host Harvard. The round-robin event was held inside the football stadium under their winter bubble.

All sides were encouraged to bring extended squads over the twelve that normally participate in 7’s events. Fifteen players were selected however Brown held out both(Alex Ogilvy ’20 and Austen Royer ’21 because of minor injuries.

Prior to the games, a moment of silence was held in honor of a Northeastern rugby players who recently took his own life.

Brown opened up the day playing Boston College in the first match. The Bears opened up the scoring with freshman William Zeller dotting down the first points on the day. There were no posts so no conversions were attempted. Sophomore Hudson Lee was second to score followed once again by Zeller. As the half was finishing out, Campbell O’Conor added another 5 points for the 20-0 halftime lead. The second half had Lee notching up two more tries to end the game 30-0.

Game two for the Bears was against a well-polished Northeastern side. Northeastern had lost their first match to Harvard so they were hopeful to come away with their first win on the day. Brown however was not willing to oblige. Less than 30 seconds into the game, Christos Economos was put through a gap for the first 5 points. A couple minutes later saw Jon Kim score his first try on the day. Zeller added to his scoring totals with the last try of the half. With a 15-point lead, Jon Kim added to the total soon into half two. Amar Dhillon ended the game with two tries of his own, one being a 70-meter tear. The game ended with the same score as the first, 30-0.

The Bears capped off the day with their final match vs a confident Harvard team. Harvard had also won their first two matches. This would be a re-match of last year’s meeting in the Ivy 7’s championship that saw Harvard come away victorious 12-5. Harvard was full of confidence going into the match and intended on notching up another win. Brown had other plans in mind. The first half saw Jon Kim score twice and captain Sean Lumkong once. Harvard did put in a try of their own. As the score in 7’s can turn on a dime, Brown was in no position to take the second half lightly. A strong defense denied Harvard of any further points. Adding some nails to the coffin were Zeller and Grant. Brown finished out their day with the 25-5 point win.

It was a good opening day for Brown scoring 85 points and conceding only 5. Next up for Brown will be round one of the NEC Spring 7’s competition. This will be held at Brown on Sunday, March 1st at the Berylson Family Fields. The NEC 7’s will be a good opportunity to pull in some of the other players and give a few of the guys who played today a rest. This will be a larger format with Brown being joined by Stonehill, Boston University, Wentworth, Southern CT University, Bentley, U. Mass Lowell and U. Maine. Come join us for a full day of rugby.