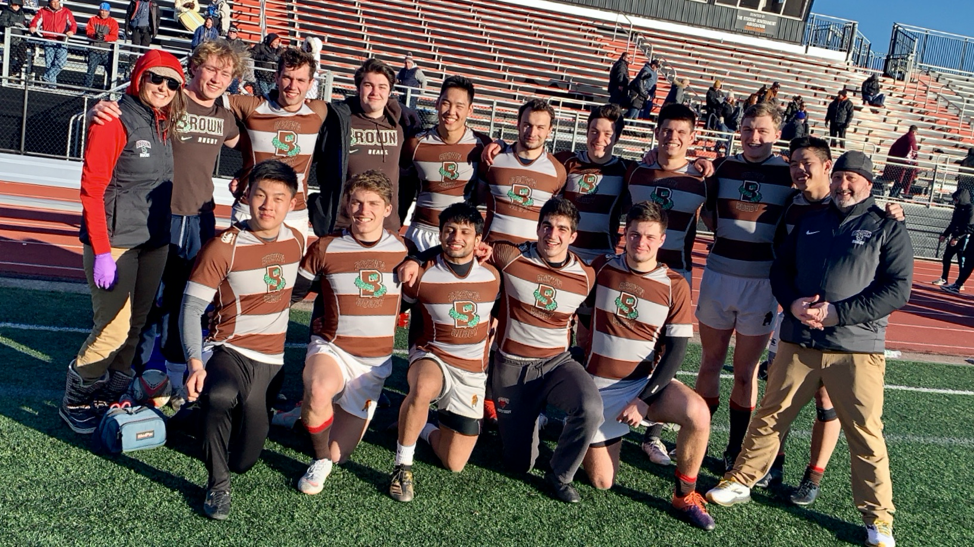 University of Delaware, Monroe University, Rutgers, and NOJO (a side from northern NJ)

Brown opened up their day against Brockport. The brisk temperatures in the low 30’s saw for slow starts in all of the early rounds. Brown too was slow to get their engines running. Three minutes into the game Brown drew first blood with a score from wing Hudson Lee. That try was then equaled by sophomore Jon Kim however, with no time remaining in the half, Lee would score his second. None of the tries were converted. The three first half tries were equaled in the second half as Kim dotted down his second (20 seconds into the half) followed by captain Sean Lumkong and finally sophomore Duncan grant. As in the first half, no conversions were made. Brown could now chalk up win #1 on the day with 30 points in the books.

Game 2 was against a less experienced Nazareth College. Again, three tries in the first half matched that of the first half of Game 1. Freshman William Zeller scored the first two with freshman Campbell O’Conor the last one. All three were converted by Lumkong. With a comfortable 21-point lead at the half, Brown pounded in 5 more tries to seal the fate of the Golden Fliers from Rochester. Peter Smith and Jae Kim each added points while Campbell O’Conor trotted in three tries of his own. As the final hooter blew, Brown had added win #2 with a comfortable 46 points.

Game #3 saw the Bears up against what one might call an older and more shifty Morris men’s team. With a combined team age somewhere north of 250 years, the game was bound to feel longer for them than us. Strangely enough, the game was actually shortened. Maybe it was the referees way of showing mercy however the first half was a good 90 seconds shorter than the normal 7 minutes. The second half a clear 60 seconds shorter. Sean Lumkong converted three of the six tries in this game. Those six tries were scored by (in order) Amar Dhillon, Christos Economos, Jon Kim (1), Jon Kim (2), Campbell O’Conor and Jon Kim (3). Thirty-six points later, and Brown were through as the pool C winners.

Next up were the semi-finals and finals. With three pools, the top team in Pool A (Delaware) and pool C (Brown) advanced. Because pool B had 5 teams, they saw two teams move on to the play-off rounds. WPU was undefeated… they would face Delaware. The last play-off team proved to be more problematic. Many of the teams had the same record. In the end, it was U Albany, who’s points differential saw them through despite losing to Montclair. In fact, the coaches of U Albany had to be called to come back to the fields as they had already left for their return trip to Albany.

Brown Bears vs University at Albany

Brown’s semi-final against U Albany was less than fruitful for the Great Danes. The first half scoring for the bears went something to the tune of: Campbell O’Conor, Jon Kim (converted by Jon Kim), Christos Economos (converted by Lumkong) and an end of half penalty try which would have seen Hudson Lee add more points but for a defensive tug of the jersey during a kick chase. Second half points were added by Jae Kim (Lumkong converted), Jon Kim and Pablo Lavilla (converted by Lumkong). With a tally of 45 points, Brown were on to the finals.

WPU had narrowly defeated Delaware with a late try to advance to the final against Brown. The final game of the day started off as a test of physicality. Brown scored first just after the first minute however the rest of the half saw the bears have to make several goal-line defensive stands. WPU was the first real challenge of the day to Brown’s structure. In fact, no team previously had spent any time in Brown’s half. With the half going over into extra time, captain Lumkong provided 5 more points and a slight cushion going into the final half of the day. Unfortunately for the home side, their first half surge would be like their last gasp of breath. Jon Kim opened up the last half scoring. Then, from the kick-off after the score, the elder Kim brother (Jae) kidnapped a well-placed ball out of the air splitting the defenders like Moses parting the red sea. Virtually untouched, 5 points were added by Jae to the score (with Lumkong to convert for two more). A WPU fan was hear shouting from the sideline “stop the bleeding” however the bleeding would not be stopped. Economos scored, then Lee (converted by Lumkong) and fittingly, to end the day, Lumkong scored and converted the last points to end the final 43-0. The Bears played very well on the day but the second half of the final was a pure display of true rugby. Even the referees were complimentary of the display put on by the men from the north.

An excellent team effort on the day saw Brown come away with an even 200 points (and none conceded). The top points scorer on the day was captain Sean Lumkong. Sean put in three tries and kicked 13 converstions for a total of 41 points. A close second goes to sophomore Jon Kim with the team high 7 tries (and one conversion) totaling 37 points. Close in the race was freshman Campbell O’Conor with 6 tries equaling 30 points.