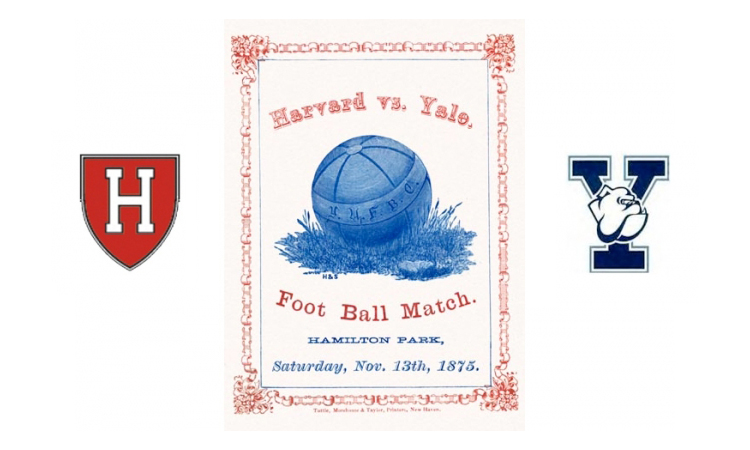 1875 program for the rugby match between Harvard and Yale

Some 144 years ago on November 13, 1875 Harvard defeated Yale four (4) goals to none in what is considered the first rugby game between Ivy League teams. The game was played at Hamilton Field in New Haven, Connecticut. The two teams played with 15 players (rugby) on a side instead of 11 (soccer) as Yale would have preferred.

Despite its decisive defeat, Yale was so taken with rugby that it became a convert and adopted the rules. Observers from Princeton who saw the game also were won over to rugby, and in 1876 representatives of Princeton, Harvard, Yale, and Columbia organized the Intercollegiate Football Association. They adopted the code of the Rugby Football Union with a change in the scoring rule--instead of a match being decided by a majority of goals alone, it was decided by a majority of touchdowns. The egg-shaped leather ball replaced the round rubber ball of soccer. Rugby thus became the American college football game.

The adoption of the Rugby Football Union code with an exception is significant. Even at this early stage the rules of the game were the rules of the four Ivy League schools making up the Intercollegiate Football Association. From the very start, the Ivy schools were determined to make their own rules making changes as they saw fit.

In a few short years, Yale graduate Walter Camp had modified the rules in such a way that American football was it's own game; different than the code of Rugby Football Union. Rugby Football would remain on the college campuses but to a much lesser significance to the popular American game which we now simply refer to as football.

These days, rugby at the eight Ivy League schools follow the rules of the International Rugby Board (IRB) and USA Rugby.