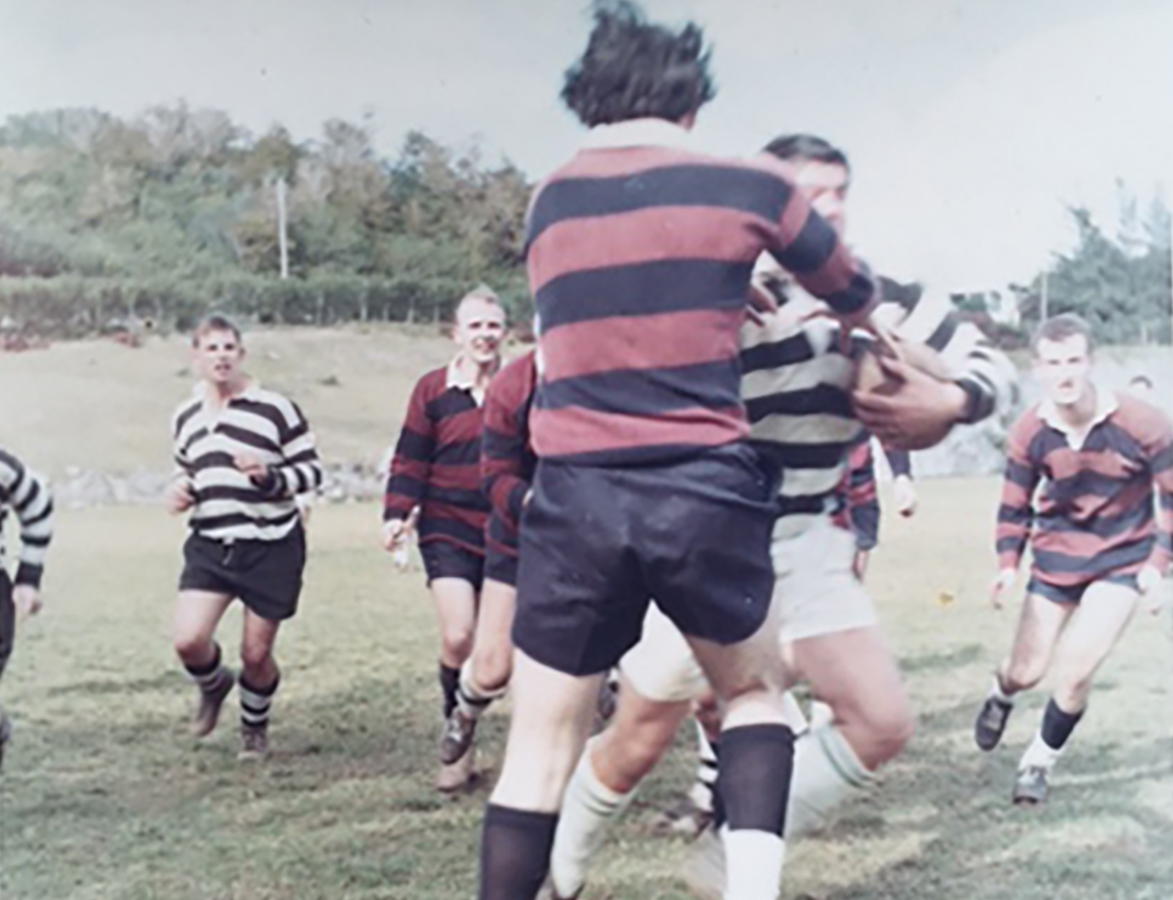 I brought Penn Rugby here 50 years ago as team captain and coach. I returned this time with my wife Rosemarie this time as a Penn supporter. (Oliver kept himself busy running touch when ever they'd let him all weekend.)

Nostalgic about my trip 50 years ago.

At that time rugby was slowly growing throughout the Ivy League and other eastern colleges and universities stimulated by Bermuda Rugby efforts to bring American collegiate football players to Bermuda to learn football's ancestral game of rugby. That resulted in the 1951 founding of Dartmouth Rugby my first club. There I rose in the annuals to score two "A" team tries against Villanova University and then to captain of the "C" team in the spring of my senior year with a array of American footballers in my backfield.

I went on to the University of Pennsylvania where I earned a Ph.d. in philosophy. Along the way, I was elected captain of Penn Rugby. In that position I followed the Dartmouth tradition of going on spring break rugby tours. Naturally, I led Penn straight to Bermuda, accompanied by my late wife Christine. I financed our trip on my modest graduate student income in part by selling my body to Penn Medicine for various scientific studies.

We got bed and breakfast form the fine captain of the Bermuda Rugby Club. Team members got the same from other Bermuda Rugby families.

Now the team is housed in the Warwick Camp barracks (Home of the Bermuda Army).

Then we were able to eat out lunch and dinner with pocket money and rent small motorized bikes with which we buzzed all over the island. When Christine and I met teammate Norm Dahlgreen motoring the other way, we stopped, and when we told him of a Bermuda we were returning from, Norm said, "already been there, saw that," and quickly motored off.

On the then island rugby pitch, we played four games in the six days against the Bermuda Rugby Club, the police, the teachers, and an all-star side. We finished with on the up side with a victory over the all stars. I scored one try, but lost virtually every hook to the fast feet of the Bermudian scrums.

I jogged on to the pitch for our last game felling battered and sore, but this quickly melted away in the heat of rugby contact.

In between matches we went to the beach enjoying the sun, the sand, and the water. Other collegians were there but few vacationing tourists. Those nearest on the beach were shocked to see me pull blue books containing my students' philosophy essay exams to grade as if they imagined their professors grading their exams back at the universities.

My young wife, an avid swimmer enjoyed the water. Also as an antique collector she found and bought a fine, carved, English bread board for $1.50 at a thrift store. I still have it as a prized possession It might go now at auction for $30. Present Penn ruggers will probably bring back only small inexpensive mementos.

Fifty years ago I came here with only my teammates. Now we have an entourage:  two professional coaches, a medial trainer and two parents Jim and Sarah Biden.

Jim and Sarah are enjoying staying at the Fairmount Southampton with me and Rosemarie. Jim served as principal fund raiser for his brother, Joe, the former U.S. Vice President , in his first campaign for office. Jim is now the proud father of son Nick, a star wing of Penn Rugby who scored twice and made a game-saving tackle.

A teammate of mine 50 years ago also rose to political prominence, namely Patrick Norton Esquire, who was a lead attorney for President Ronald Regan. Pat was a fine teammate of mine as well as my student in Ancient Greek Philosophy.  He became a Rhodes Scholar and went on to a fine legal career.

In place of the lone rugby pitch, we've all been enjoying the fine twin fields at the National Sports Center and viewing deck / reception center of the rugby field house served by the well-coifed white and black Bermudians. I've been impressed by how well educated and sophisticated Bermudians have become. I wonder what it will be like when I return 50 years from now.