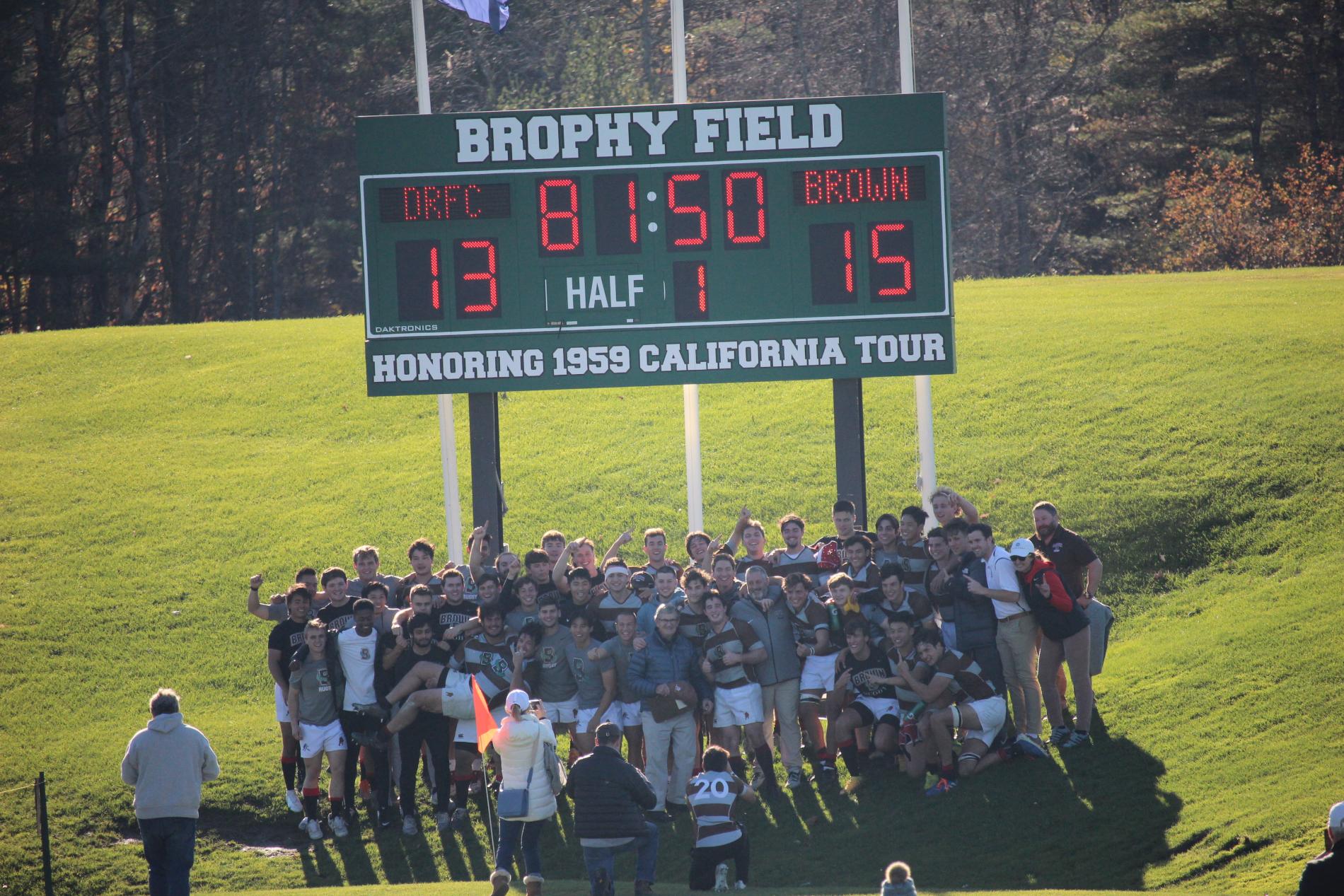 Dartmouth College Brophy Field, Hanover, NH. Brown defeated Dartmouth 15-13 in a tense and hard fought battle for Ivy League supremacy in this fall 2021 League season, overcoming 25 years, yes a quarter century, without a Brown 15’s victory against the Big Green. Both teams entered this final Ivy Conference match having defeated all of their Ivy opponents. Outside the Ivy League, Dartmouth had defeated West Point 21-10 and Brown had lost to West Point 17-14. If history and this season was any indication, this match would be a high scoring affair with Dartmouth likely to win again.

No excuses for either team as the day offered a dry firm field, bright sun and a very light fall breeze for both teams in Hanover, New Hampshire.

But Brown, we thought, gave a glimpse of things to come as the Bear scrum pushed the Big Green back on the first scrum of the match. As well the defensive intensity on both sides gave pause as to how long the pace and intensity could be maintained.

More photos of the match »

In the seventh minute of play Brown moved the ball wide and left wing Duncan Grant slipped two tackles then raced untouched for the match’s first points and, with Raphael “Raph” Lansonneur’s conversion, Brown was up 7-0. Fullback Jon Kim had made an effective 25 meter break into the Dartmouth half of the field with center Will Zeller carrying the ball another 10 meters, creating field position for Grant’s score.

Although the coaches and our alumni, we are certain, were surprised if not shocked at the ease with which Brown had scored, the team, most of whom due to the 2020 and 2021 hiatus from rugby due to COVID 19, had never played Dartmouth, were willing to just play their game and see where the chips would fall.

Over the next 33 minutes the team knew they were in a dog fight. Brown would work its way deep into the Dartmouth end and then a penalty or turnover would send Dartmouth deep into the Brown end where Brown’s defense would hold off the Big Green. What had begun as perhaps a high scoring affair had turned into trench warfare.

The Second XV was likely basking in the glow of the First XV match as their match got underway. The team lacked intensity and defensively was allowing Dartmouth outside and wide with overlaps. The home team scored an unconverted try at 15 minutes and Brown was probably lucky that the Green did not score again in the first half. But Dartmouth opened the second half with another unconverted try to hold a 10-0 lead at 41 minutes.

The Bears began to take the attack to Dartmouth and found themselves deep in the Dartmouth red zone where scrum half Dylan Lewis took a quick penalty which is becoming his signature move, passing to Chase Bekkerus who powered through the defense for a try, converted by fullback Lucas Tay and suddenly Brown was trailing Dartmouth by only 3 points, 10-7.

At 53 minutes, Dartmouth again scored an unconverted try to go up 15-7, but 5 minutes later, scrum half Dylan Lewis, at a ruck 5 meters out from the Dartmouth line, made a dummy pass and slipped inside the defender, scoring under the posts. Tay’s conversion put Brown only a point behind Dartmouth 15-14 with 22 minutes left to play.

Dartmouth, at 61 minutes scored again but also missed the conversion leaving Brown close enough for a come back, trailing 14-20. Not wanting to lose, Brown increased the pace and pressure, moving the ball deep in the Dartmouth end where a Brown lineout was driven over the line with hooker Joe Al-Hasso touching down for the score for 5 points but still trailing the Green 20-19. As it turned out the missed Dartmouth conversions loomed large as the home team had scored 4 tries but missed all four conversions.

With the last minute of the match winding down, center Campbell O’Conor’23 took a pass, broke a tackle and ran 50 meters for the game winning score. Dylan Lewis converted the try and Brown won the Second XV match 26-20. Brown Rugby had secured the trifecta on the day: a First XV victory 15-13, a Second XV victory 26-20 and the Ivy League Championship for 2021.