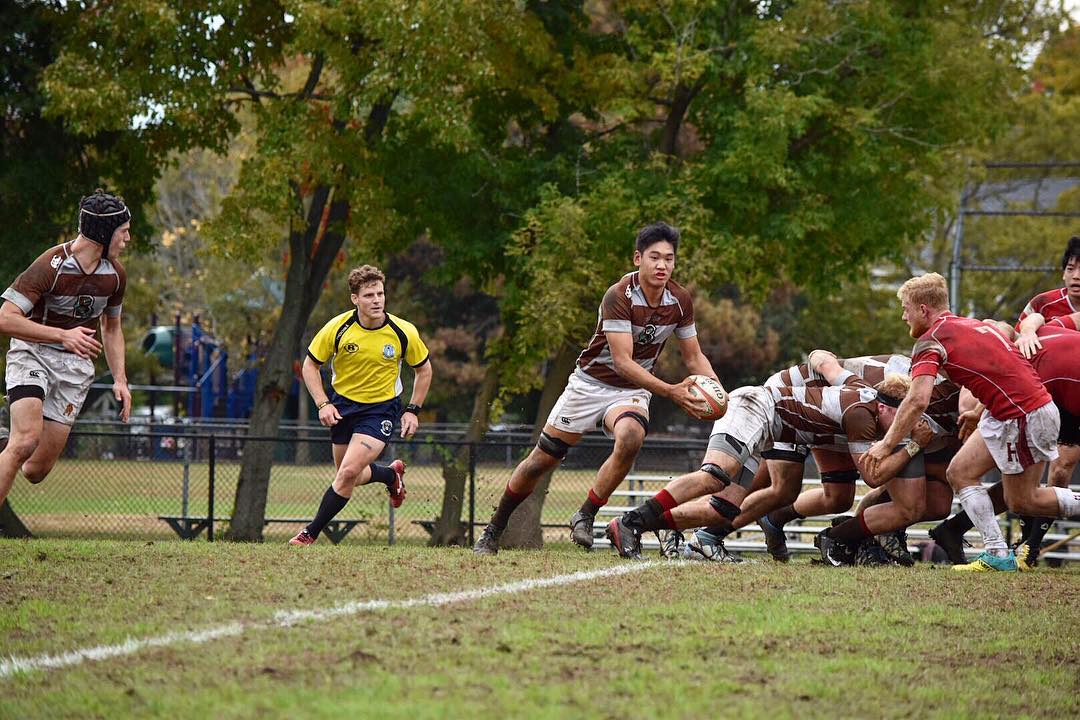 Brown Eight Jae Kim breaks off the back and into space

Providence, Rhode Island -- The Brown and Harvard rugby squads put on a heart stopping match with the Bears finally prevailing before a vocal partisan Brown Family Weekend crowd at the Brown Rugby Field. Both teams gave their all with Brown controlling most of the first half, but losing their way and the lead over 15 disastrous minutes of the second half before the final dagger from freshman scrum half Peter Smith gave Brown the last minute victory.

Brown scored in the 4th minute of the match, but Harvard came back with two tries before Brown scored again for a 14-12 lead, all within the first 25 minutes of the match. Brown maintained control through the half adding a penalty kick and a Peter Smith try and turning back Harvard’s offensive initiatives.

Brown’s first half tries: center Jon Kim’s run from a ruck for 15 meters, wing Christos Economos’ try, set up by the run of R.J. Oris, and scrum half Peter Smith’s score from a quick penalty, were all converted by the foot of Alex Ogilvy whose points would prove critical at the end of the match.

The second half would seem to turn on whether Brown could stifle Harvard’s strong running and rucking and add enough points to secure the win.

Although weather all week had not dried out the field, the damp ground was not very slippery and the game saw open play throughout. As the second half began, the Bears knew they were in the driver’s seat. One more Brown try would probably break Harvard’s ability to recover from its 19 point deficit.

Brown took the second half kick-off and worked its way down to the Harvard line but an inopportune Brown penalty turned the ball over to Harvard. Brown would not see another scoring opportunity until the last five minutes of the match. Play moved back and forth on the field with Harvard scoring 17 minutes into the second half. Brown then lost a player to the sin bin for the next 10 minutes, forcing the Bears to play a man down. The lost try, the sin-binned player and too many penalties all conspired to provide a momentum shift to Harvard, and Harvard took full advantage.

Brown gamely held on but conceded two tries to fall behind 33-31 before the yellow card was over and Brown returned to full strength. Brown had dominated the scrums in the second half, so it was a last opportunity when Harvard was awarded a scrum about 30 meters from the Harvard in goal. Brown drove the scrum aggressively, with Harvard trying to secure the ball cleanly from the back of the scrum half. The ball popped out of the scrum, but Brown scrum half Peter Smith quickly scooped up the ball ran 25 meters to the Harvard line for the score and the match.

What a finish and what a terrific victory.

Although everyone played with commitment, we note the exceptional lineout play and running of sophomore lock Austin Royer as well as the overall performance of senior lock Alexander Berman who moved up from the second XV for this match.

Brown has now played 8 matches this fall, all victories. The team travels to Dartmouth next Saturday, October 27 for its final fall Ivy Conference match. The victory over Harvard secures Brown a place in the Ivy Conference playoffs, however, the opponent and venue is not yet known.