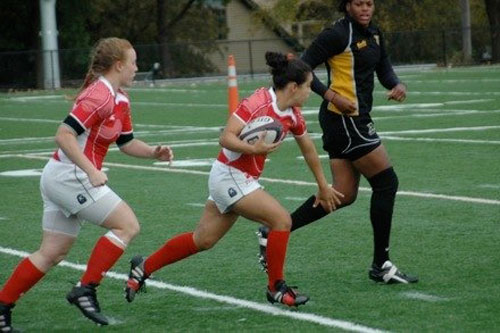 Brown Women executed a patient, controlled game plan to perfection and beat the women of Army 24-15 to earn the number 1 seed from the Northeast and a third trip to the national championships.

Both teams came out strong, with Army scoring first off a penalty kick to take a 3-0 lead. Off the ensuing kick-off Army found a breakaway wide and brought it back into the middle to score between the posts to go up 10-0. But that was all the points Army would earn for the next 70 minutes. Brown stuck to a game plan of mid-range rucking; controlling the ball with picks and punches, sucking the Army forwards into the loose before spinning the ball out to the Brown backs who crashed in the centers, drawing in Army backs and leaving room for the loose forwards to get behind the Army defense. The plan moved Brown methodically down the pitch, exhausting the Army forwards and starving the Army backs of possession. Center Michelle Un ’11 opened the Brown scoring with an inspiring run from 20 meters out, crashing through the centers and dragging 3 Army defenders as she lunged over the line to put Brown on the board and lift her teammates. Fullback Blaine Martin ’11 kicked the conversion, Army 10 - Brown 7. Brown continued to ‘out tough’ Army beating them to the breakdowns and realigning with speed and confidence. Twenty minutes in, Army was penalized 20 meters out from their line and Brown ran a penalty play sending center Alex Hartley ’10 crashing over to score right between the posts, Blaine Martin converted and Brown took the lead for good, 14-10. Brown gained confidence and the Brown backs began to hit the line hard punishing the Army tacklers and controlling the possession. After the half, Brown continued to dominate in the loose, and grind down the Army forwards. Driving to the Army line, Alex Hartley picked up a ball at the base of a ruck and dove over to put Brown up 19-10. Blaine Martin provided the next score running 60 yards off a counter-attack, dodging a number of Army defenders to score a decisive try and put Brown up 24-10. With 5 minutes remaining Army found space for a try in the corner to close to 24-15. The last few minutes Brown was bottled up at the Army 40-yard line but continued to control the ball and stall any Army attacks. The final whistle blew and Brown exploded with joy and relief. With this win Brown retains the Northeast title for another year and earned a #4 seed in the national tournament. The win was vindication for Brown who lost the New England Championship and their number 1 national ranking to Army 2 weeks prior. The win was equally sweet as it was perhaps the finest match Brown has played all year. The team showed great discipline, patience and courage executing the game plan, perhaps more importantly Brown demonstrated composure, good sportsmanship and good humor under a great deal of pressure and some chippy Army play. What a fantastic bunch! Photo: Brown's scrumhalf Yadi Ibarra (with the ball) supported by #8 Alex Hartley.