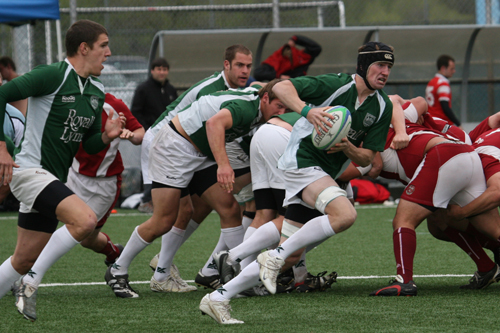 Dartmouth won the 2008 Ivy League Championship in what can only be described as extremely convincing fashion. Led by two tries from wing Dave Chattman, the Big Green destroyed Harvard 41-0 in the final.

story and photos courtesy of Ed Hagerty New York, NY Over the course of its three games, Dartmouth outscored its three opponents 143-0. Brown took third place with a 22-12 win over Penn. Path To The Final Dartmouth warmed up by defeating Columbia 40-0 in its quarterfinal match and then accelerated past the University of Pennsylvania 62-0 in the semifinal. Harvard’s preliminary round matches were also impressive. Their 39-7 quarterfinal win over Cornell and a 28-8 semifinal defeat of Brown gave rise to expectations of a competitive final. The fact that the two teams had played to a 6-6 tie in the Fall also foreshadowed an even match; but it was not to be. See Round-by-Round 2008 Ivy League Tournament Results Final Dartmouth 41, Harvard 0 Dartmouth wasted little time opening their account. Two minutes into the final, they won a lineout on Harvard’s five and drove the ball over the line where #8 Matt Alkaitis touched down, 5-0. Harvard missed a penalty goal in the sixth minute and it wasn’t until the 19th that Dartmouth scored again when scrumhalf (and tournament MVP) Gordon Silvera nailed a penalty, 8-0. Silvera’s conversion of a try by Dartmouth flanker Ian Wilson in the 21st minute ended the first half scoring with the Big Green up 15-0. Second Half Dartmouth extended its lead ten minutes into the second half when wing Dave Chattman out raced a defender to down a ball that had been grubbed into Harvard’s end zone. Silvera converted, 22-0. Chattman got his second try nine minutes later with a great jinking, tackle-breaking run from about the 22, 27-0. Dartmouth’s final tries were scored by Zach Scott in the 24th and reserve prop Chad Felter in the 32nd minute. Silvera converted both bringing the final score to 41-0. Post-Script We spoke with Dartmouth Coach Alex Magelby following the match and asked how he accounted for the difference in the 6-6 tie with Harvard last fall and their 41-0 win today. Magelby cited three factors: “We were missing a number of starters last fall, and the team’s mid-March tour to England certainly helped.” He also felt that Dartmouth’s recent trip to the Collegiate Sweet 16s, where they played respectably, “helped to lift the bar.” Of Dartmouth’s performance in the Ivy League Championship, Magelby concluded: “We were just trying to be the team we wanted to be.” Dartmouth Scoring: Silvera P, 4C, Alkaitis T, Wilson T, Chattman 2T, Scott T, Felter T. Referee: Nick Priscott