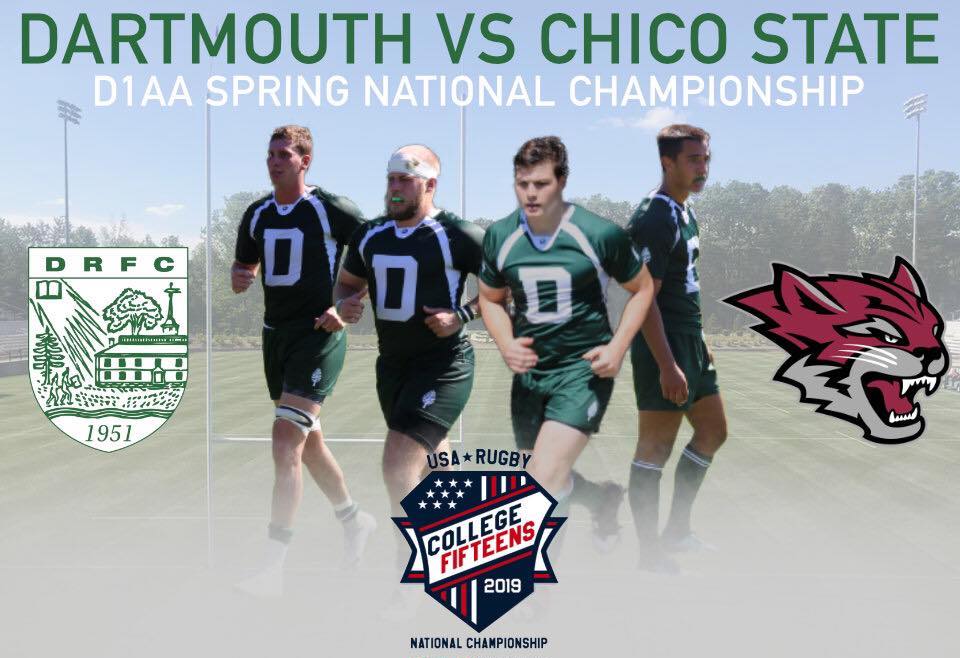 The DRFC faces off against Chico State for the USA Rugby D1AA Spring Championship.

The lads returned to Carolina this weekend for the DIAA Spring Championship match against Chico State.

A bit of contention regarding California’s sports funding rules caused pre-match drama, but the meeting went on as scheduled. Temperatures in the 80s and a dose of humidity met the squad at a beautiful pitch in Charlotte. A deep kick-off from Co-Captain Jack Badenhausen '19, toughing it out on an ankle injury, set the Big Green up for a lineout on the opposition 5-meter. Dylan Burke ’19 gathered an overthrow from the Chico hooker. The backs swung it wide from the ruck off the lineout, Lewis '21 to Weir '22, to Green '22, to Sheehy '20, to Badenhausen for the finish in the corner, a beautiful through-the-hands play, and putting 5 on the board less than two minutes in. An attacking scrum on our own 40 began the next march to the sticks, aided by from a kick off Freshman Phenom Mike Weir’s boot, which was recovered by Gyorgy Brevnov ’20, who came screaming down the pitch to recover the ball 10 meters out.

A minute and eight phases later, during which all fifteen worked to stretch Chico, moving the ball sideline to sideline twice, Skipper Struan Coleman ’19 exposed a gap in the line, crashing off Weir for a try under the sticks. A penalty drawn from Chico at the breakdown on their 40 put Pat Sheehy within striking distance, and he split the uprights for three more. A steal at the lineout from Malcolm P. Robinson ’22 put the boys on the front foot. Mikey Weir then found the Co-Captain Fuller Winton ’19 making a cameo appearance in the forward pod. In his classic “Champagne Rugby” style, the tall man galloped through the defensive line and evaded his pursuers, capping off the 50-meter run with an elegant dive into the try zone. Superb pressure from Dartmouth’s pack at the lineout forced Chico to try for the “X-ball” option (a short throw to the front man), which proved no better against Winton’s long limbs. The backs put it across the pitch for Luke Bienstock ’20 who dragged two defenders about twenty meters until he finally relented at the 5-meter line. A ball out the back from Weir to Sheehy put Koch '20 on the move. He moved then sent it wide again to winger Brevnov, who literally shook off three Chico defenders and spun in for the try. Some theatrics from Weir and Green filled the interim, most notably, a big cross-field kick that Green brought down on the edge of the try zone, but was ruled to have had a boot dragged into touch before ball met turf. The first half expired on a heavy-hitting goal-line stand from the Big Green, 29 to nil after the first.

The well was a bit drier for the first twenty minutes of the second half for the Big Green’s attack, with a bit of loose play from both sides resulting in several scrums and penalties. The silence was broken off a lineout inside the Chico 22-meter line, the boys swinging it cross-field with ease. On the way back, a hole opened for Weir as the defense fired up on the forward lines, 36 to nil 65 minutes in. A kicking exchange from the backs after the restart ended with a magnificent take from Parker Hall '20 at halfway. Weir put it back to the boot for Brevnov down the sideline, who gathered at the 22-meter line and glided in for the score. Credit to Mason Koch ’20 who set the platform with three consecutive receptions off the restart. Chico broke the shutout in the seventy-first minute with a goal-line dive for the chalk. A penalty put Dartmouth on the hind foot, and Chico’s attack made some meters through phase play into the 22. A series of tackles culminated in a strip from Coleman, gathered by JM Seibert ’19 who carried through the defense to clear the 22.

President Reed Kuivila ’19 also came off the bench and made his long-awaited return to the second row, offering a strong push in the scrum. Marwan Zelmat ’19 made his presence known, stepping out to the wing and positively barreling over two Chico defenders for a 10-meter gain (Zelmat has been out with injury since Tour, and secured a well-earned a spot on the DIAA side after he was cleared just recently). Coming back off the sideline, Seibert gave to Big Man Sean Dowling ’21 to bring Dartmouth deep into the scoring zone, then popped it off the floor back to Seibert to buy time for support to arrive and put the boys near the 5-meter line. Kuivila with a strong carry up the middle drew the advantage. With regular time expired, a penalty right in front of the posts would be the last play of our 15s season. Opting for points, the lads egged their Skipper Struan Coleman on to put the finishing touch on a wonderful four years for the ‘19s. Never mind the wide kick from our beloved No. 8, what a way for the Seniors to go off. Final score Dartmouth 43, Chico 5. In the words of our Skipper, memorialized forever in his USA Rugby post-game interview, “it was a great day to administer some beat-down!”

Medals, the trophy and pictures followed. It was a long road back from last year’s loss in Fresno, but the lads returned to finish the job, as we would well expect from any DRFC side. A huge congratulations to all, and a big hand to our seniors, who rounded out their last year of XV’s conference play undefeated. Those emotional final words shared by the ‘19s in the locker room after the championship are yet another testament to how profoundly special the Club is to us all. The message was strikingly consistent from all—the Club is our Home, our Family and the core of our Dartmouth experiences. As always, our gratitude goes out to the parents and friends of the Club who came out to support the boys in this endeavor. A very special thank you to the generous DRFC alumni who supported the financing of our competition in this years DIAA Championship. A full replay of the match can be found here.

The boys now transition into 7s training, with the CRC coming up in June. Stay tuned for more on the CRC and a special Senior Farewell post coming soon.

Thanks to all those friends and family of the Club who’ve been keeping up with our match reports this year. It’s been a true pleasure and privilege of mine to write them up. I’ve had very exciting material to work with—credit to the lads for that. I hope the reports have been enjoyable to read and the typos few.