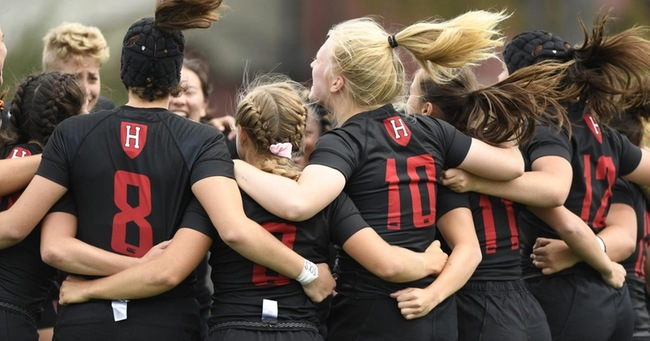 CAMBRIDGE, Mass. – The Harvard women's rugby team (7-1) finished the home slate undefeated, taking down American International (4-4), 54-7. The Crimson advances to the NIRA semifinals with the victory.

It only took 35 seconds for first-year Sofie Fella to give Harvard a lead they would never squander. Her try was followed up with back-to-back trys from senior Rachael Harkavy.

With a 15-point lead halfway through the first half, senior Caitlin Weigel charged through the American International defense untouched at midfield and took it all the way to the try zone to extend the lead. Just three minutes later, Weigel would create some room and dish it off to first-year Cassidy Bargell, who sprinted down the left side of the field for another first half try.

The second half began just how it ended, as a mad-dash for the try zone ended with senior Genevieve Quirion touching down for the try to add to the Crimson lead. Shortly after, Fella would juke two defenders and dish it to Bargell for another try.

Junior Delia Hellander served a couple mean stiff arms through the defense to add a try of her own midway through the second half. The Crimson would conclude the game with try's from Weigel and senior Susie Clements to cement the victory.

On Friday, Nov. 16, Dartmouth will host both semifinal matches at Brophy Field. The Big Green will play the Army at 12 p.m., while the Harvard will take on the winner of the Quinnipiac at 2 p.m. The championship game will be played on Sunday Nov. 18. Matches will be broadcast on ESPN+.

WEST POINT, N.Y. - The Army women's rugby team is moving on to the final four of the NIRA Championships, after a masterful 61-3 victory over Norwich at the Anderson Rugby Complex.

HANOVER, N.H. – No. 1 seeded Dartmouth women's rugby had a 75-15 victory No. 8 Brown in the NIRA Quarterfinal at Brophy Field on Saturday. The Big Green improved to 7-1 overall and advanced to the semifinal, while the Bears saw their season end with a 2-5 mark.

HAMDEN, Conn. –  The No. 3 seed Quinnipiac women's rugby team dominated from start to finish Saturday afternoon as the Bobcats cruised to a 46-5 over the No. 6 seed Notre Dame College Falcons in the NIRA Quarterfinals.