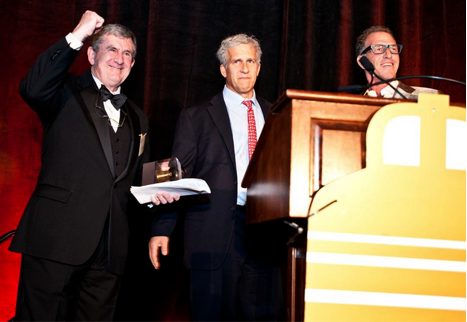 Longtime Brown rugby coach Linton A. “Jay” Fluck was elected to the Brown University Athletic Hall of Fame at a ceremony on Nov. 8, 2014.

Fluck, along with Dave Zucconi (’55) coached the Bears from 1980-2009, posting a 315-230-12 record. During his tenure, the Bears won eight Ivy tournament titles and qualified for nationals in 1996, finishing the season ranked #8 nationally. In 1984, Fluck led Brown to victory at the New York 7s, one of the most competitive tournaments in the country.

Fluck and Zucconi directed efforts to raise $800,000 for a new rugby field, which opened on campus in 2003. He has been Director of Rugby at Brown since 2009, overseeing fundraising and administration and hosting the 50th anniversary Brown Rugby gala