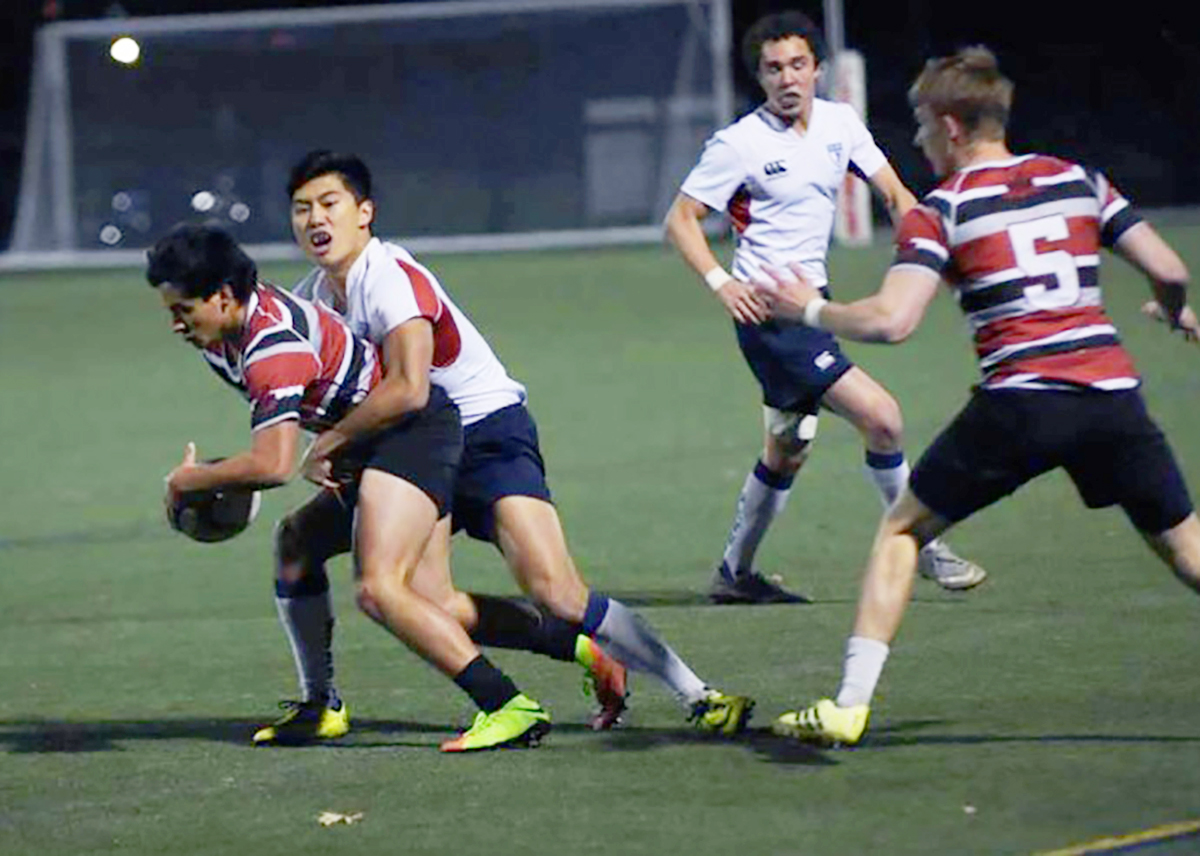 Led by junior and club President Nathan Xu, Penn men's rugby is in the midst of a stellar spring season, headlined by two City Six tournament championships. For Penn men’s club rugby, a perfect record on the spring season has cemented an astonishing upward trend for the team.

The Quakers have already played well in multiple City Six competitions. Between two seven-a-side tournaments including La Salle, St. Joes, Temple, Villanova, Drexel, and Penn, and a game against La Salle on April 4, the squad boasts an 8-0 record and now has two tournament championships under its belt.

In its first outing, Penn bested Temple 26-19 and Villanova 21-14 in group play to move onto the single elimination bracket. In the semifinal, the Quakers trounced La Salle 26-0 and rode that momentum to take down the Owls once again, this time at 24-0, in the finals.

After scoring in each match for a total of seven tries, sophomore Nick Biden was unanimously voted Penn’s player of the tournament. Junior captain Nathan Xu notched three tries and drilled nine of his 12 kick attempts. Rounding off the group effort, junior Alex Salazar recorded three tries while senior Jack Smallwood and sophomore Ted McLennan each got a try of their own.

This past week, the team made the short trek over to North Philadelphia for the next installment of the City Six.  Ranked No. 1 going in, Penn made quick work of Saint Joe's, shutting the Hawks out for a 20-0 win. Later, the Quakers bested Villanova 20-12 to move into the playoff bracket. There, they beat La Salle 24-5 before toppling the Hawks again, by a score of 15-0, for the championship.

Biden was once again the star of the show, recording another seven tries at this tournament for a total of 14 in two weeks. Salazar pitched in with two sets of three tries, while freshman Jonathan Lee scored two this past weekend.

This enormous success marks a major turning point for the program, which has struggled in seasons past. In the past four fall seasons, the team has had mixed results in conference play ranging from 0-7, 1-6, 4-3 to 2-4-1. Senior and former club president Matt Caltabiano credits the most recent recruiting class for the turnaround.

“A lot of the freshmen are really talented. There’s a few kids who have played abroad before and they’ve all done really well. They look really poised to keep the club going in the right direction. It’s probably the most talented freshman class we’ve had in a while,” he said.

As a club sport, the team relies on an interesting pipeline to build up a roster each year to varying degrees of success.

“We rely a lot on on-campus recruiting for players, including ones who have never played before like myself. We do have some foreign guys that have played before, and even some Americans as well,” Caltabiano said. “The key is player retention obviously. But I had never played rugby before [college] and then junior year, I became president of the club. It’s not a sport where you need to have played before to make an impact. If you're athletic, you can go and figure it out.”

Unfortunately, the team may not have the chance to shine again this season. With Penn unable to host what was originally planned to be the third and final City Six tournament due to lack of field availability and time constraints, the team must look elsewhere for additional matches.

“We’re not going to the Ivy Sevens tournament that we normally go to because it conflicts with spring fling, and we were worried about player availability. We did really well in that last year and came in third, so we were little bummed that we were not going to go,” he said. “Right now, we're still searching for more competition.”

Sitting pretty with a flawless record, the Quakers will search for its next opponents to continue to prove their newfound dominance.

Behind the scenes on how Penn men's rugby made Bermuda dreams a reality
Penn rugby builds a team, promotes an unheralded sport in Philadelphia