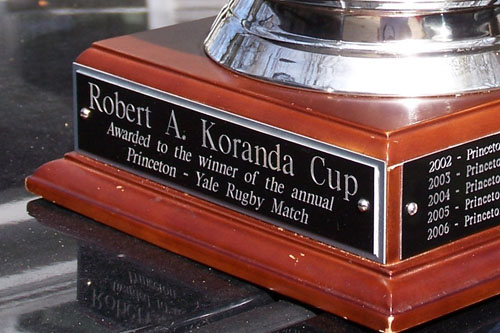 After years of only a chance meeting at the Ivies, Yale and Princeton men scheduled a match in the spring of 2002. By reestablishing the tradition in 2002, the Princeton vs. Yale contest has become an annual event. Following the 2002, Yale graciously accepted Princeton's request to make the match special for both teams by creating a trophy in memory of Rob Koranda, one of Princeton’s greatest rugby players.

Rob died in the Chicago porch collapse in June 2003, a tragedy that claimed 12 other young lives. He was a very talented flanker, and played on the Princeton team that in 2000 reached the USA National Division 1 Round of 16.

Yale is the current holder of the Cup having beaten Princeton 29-19 at Yale in 2007. Previous to that, Princeton won the original contest and had consistently defended the trophy.