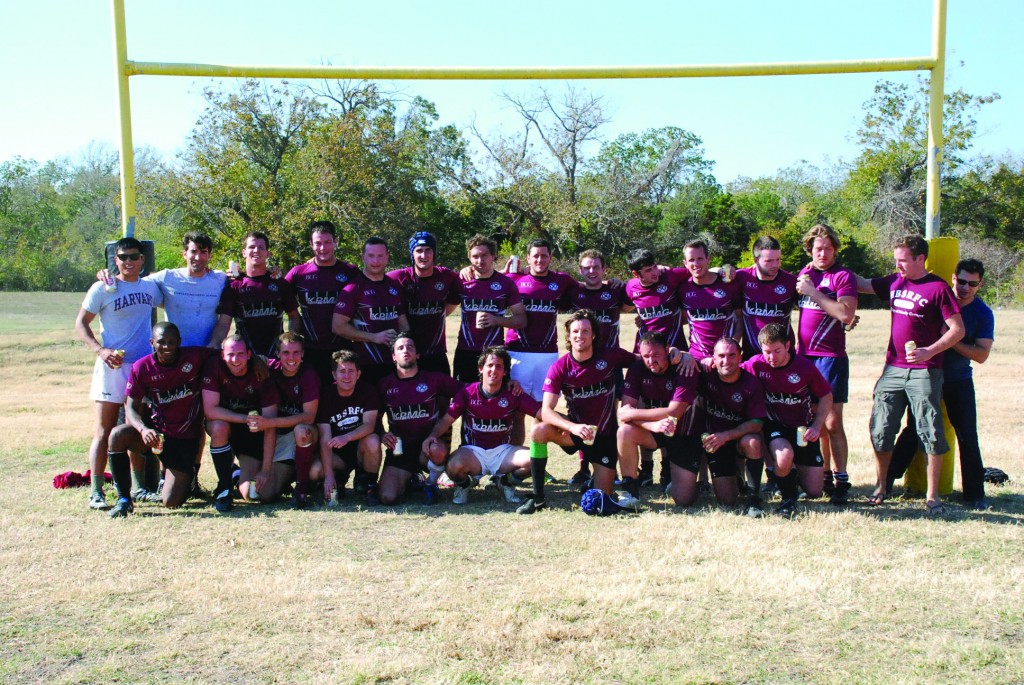 Ask anyone in Austin, Texas what Harvard Business School is famous for, and you’re likely to get a variety of responses.
Capitalism.  Educating leaders of Fortune 500 companies.  Country club lifestyles and wine & cheese parties.
But after this past weekend, those same Austinites would undoubtedly answer that in addition to being the world’s best business school, HBS has a smash-mouth, championship rugby team that has the ability to party like rockstars.
On November 11-13, the men of the HBS Rugby Team descended upon Austin for the annual Fall Brawl Tournament, hosted by the University of Texas.  The tournament was the capstone event of the fall semester for the HBS ruggers, and featured opposing teams from Stanford, Wharton, Kellogg, Texas, SMU, and Columbia.  While the HBS team knew they would enjoy the nightlife in the Live Music Capital of the World during their stay, their main goal in Austin was to bring home the first place trophy.
Shortly after landing in Austin on Friday night, the team met up with the Austin HBS Alumni Club at a happy hour social event in Austin’s famous Warehouse District.  The southern hospitality displayed by the HBS alums made the team feel right at home and helped the team to relax and prepare for its big weekend ahead.
After a full night of cultural exchange, the HBS ruggers arrived on Saturday morning at a rugby field that can only be described as one-half scrub brush and one-half rock.  Columbia and Texas were the first opponents in pool play for HBS, and the team knew that it had to come out ready to dominate from the opening whistle.
And dominate they did.
In game 1, HBS jumped out to an early lead behind the ball-handling skills of “Mini” Maxi Rotella who was playing in his first tournament with the team.  Rotella’s passing, combined with the Australian tag-team of Bob Evans and Tom Humphrey put Columbia in a hole they could not recover from.  The HBS defense, led by Dave “D-Patt” Patterson made bone-crushing tackles throughout the game and did not allow a single Columbia point.  Final score, HBS 34 – Columbia 0.
Game 2 pitted HBS against The University of Texas, the tournament host.  The game was particularly meaningful to this correspondent because, as a graduate of Texas A&M, the only thing I enjoy as much as seeing HBS win is seeing the University of Texas lose.
The Longhorns put up a fight early and were able to break through the HBS defense on a couple of occasions in the first half.  However, the 1-2-3 punch of Derek Poppinga, Germain Chastel, and Tom Dye in the backfield wore the Longhorns down.  In the second half, Ryan “Guess Where I’m From” MacWilliam added some solid play for the team, as did Bryan “Poker Face” O’Connell.  John Deng and Evan Britten-Bozone also came to add fuel to the HBS fire, and in his first appearance with the team since last year at Duke, Sayce “Slayer” Falk punched in a couple of scores for HBS to put the game out of reach.  Final score, HBS 48 – Texas 17.
Following the first two games of the day, all the teams in the tournament were seeded according to point differential.  Thanks to its large margins of victory, HBS drew the #2 seed and was set to face off against #7 Columbia again in the last match of the day.
In game 3, HBS once again hit the scoreboard first and did not look back.  Great forward play by Chad “Made in Canada” Royer, Matt “Baby Fat” Craig, and Matt “Goldilocks” Lesniak set the tone for HBS.  “Fast” Eddie Brandler and “Double B” Brandon Bentley made their first appearance of the tournament in the second half, as did Ezequiel “Eze” Satz and Paul Coote, and HBS cruised to a 38-5 win and headed home to rest up for the next day’s semifinal match.
Sunday morning, HBS faced Kellogg, the winners of last year’s tournament and a perennially good team.  Prior to the game it was clear that both teams were worn down from a long Saturday in the hot sun and a late night under the neon moon of Austin bars.  This was to be a game of mental and physical toughness, where the team that made the fewest mistakes would come out on top.
Kellogg fought hard, but HBS jumped out to an early 5-0 lead behind solid ball movement and dominance in the ruck.  But the defending champs did not quit and Kellogg was able to put in a try and conversion just before halftime to take a 7-5 lead going into the break.  With HBS threatening to score in the second half, Kellogg was called for a high tackle penalty.  Dead-eye kicking by Poppinga after the penalty gave HBS an 8-7 lead with 10 minutes to play.  Excellent front row play by Eric Montgomery, Josh Walton, and Regan Turner helped the HBS side win several vital scrums as the final minutes wore down, and Poppinga’s kick proved to be the difference.  Final score, HBS 8 – Kellogg 7.
The championship game pitted HBS against archrivals Wharton.  Wharton was no match for the HBS side in the final.  In an extremely physical match, HBS fell behind briefly and went into halftime trailing by a score of 7-5.  The second half, however, was all HBS, as the inspirational defense of Dave Patterson and the great overall play of Jonas Akins, Fats Dlamini, Garan Geist, and Anthony Bangay led the way for the good guys.  Tom Humphrey put in a try and Derek Poppinga sealed the game with a penalty kick a couple of minutes before the final whistle.  Final score, HBS 15 – Wharton 7.