Football or Rugby for the 1897 Undefeated Quakers 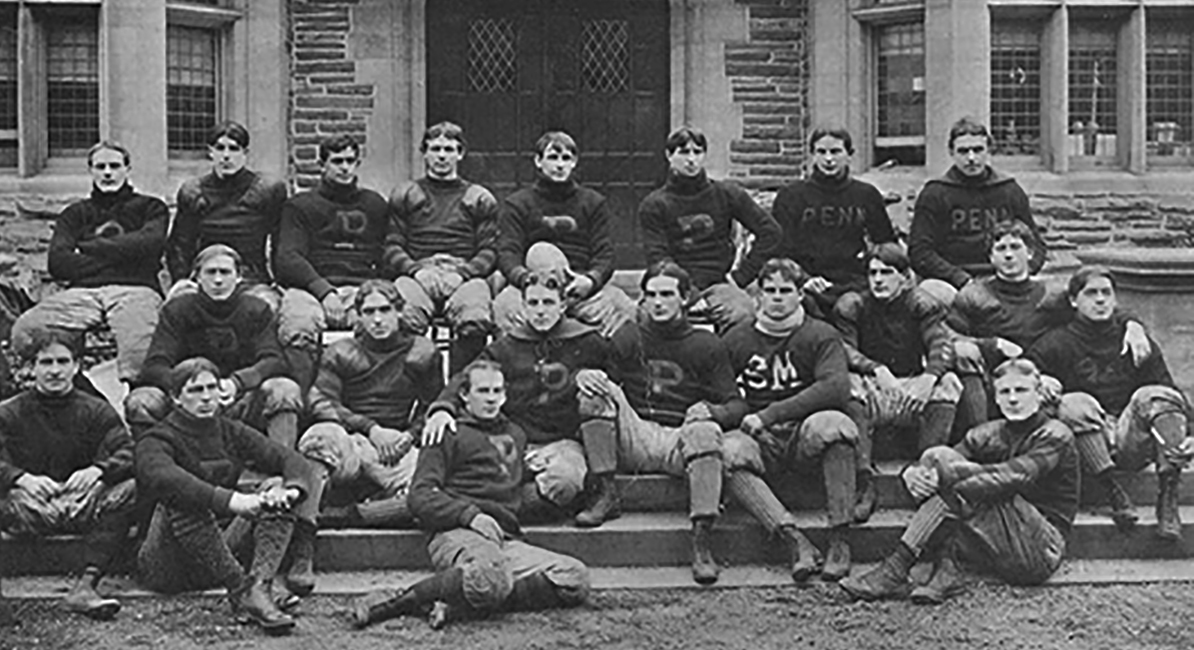 In the late fall of 1897, the undefeated Penn Rugby Football team was photographed in front of Houston Hall. The team won an unprecedented 15 games without a loss.

Though this is "officially" listed as an American football squad, the rules at the time required the ball to be touched down once a player passed the goal line. The team scoring the "touch down" was awarded a total of four points. That method of scoring and the amount of of the score was still in effect for the game of rugby until the late 1960s. Because in 1897, the game of American football was much closer to rugby, we consider the Penn team to be a rugby champion. In addition to scoring, there was no center snap; the game still incorporated the scrum to restart play at the end of the 19th century.

Teddy Injects His Bully Pulpit into the Game

Things wouldn't really change in the game of football until the 1906 season. Teddy Roosevelt, with his son playing football as a freshman at Harvard, stepped in to demand changes to the game. Unbelievable to our notion of sport, the 1905 football season resulted in 19 player deaths and 137 serious injuries. By the next season, Stanford and California switched over to rugby while Columbia, Northwestern and Duke dropped football all together.

In the offseason between 1905 and 1906 seasons, Roosevelt urged the Harvard coach and other leading football authorities to push for radical rule changes, and he invited other school leaders to the White House to discuss changes. As a result, an intercollegiate conference -- the forerunner of the NCAA -- approved radical rule changes for the 1906 season. The conference legalized the forward pass, abolished the dangerous mass formations, created a neutral zone between offense and defense and doubled the first-down distance to 10 yards, to be gained in three downs. The rule changes didn’t eliminate football’s dangers, but fatalities declined—to 11 per year in both 1906 and 1907—while injuries fell sharply. A spike in fatalities in 1909 led to another round of reforms that further eased restrictions on the forward pass and formed the foundation of the modern sport.

Until these drastic changes were made to the game, football in America and at Penn was really just the game of rugby football.

On Sept. 5, 1906 in a scoreless game, Saint Louis University's Bradbury Robinson tossed a pigskin to teammate Jack Schneider. The first ever forward pass was incomplete resulting in a turnover according to rules at the time. Called a "projectile pass” initially, later in the same game Robinson connected with Schneider 20-yards downfield. The defense was so surprised, Schneider waltzed in for the score.