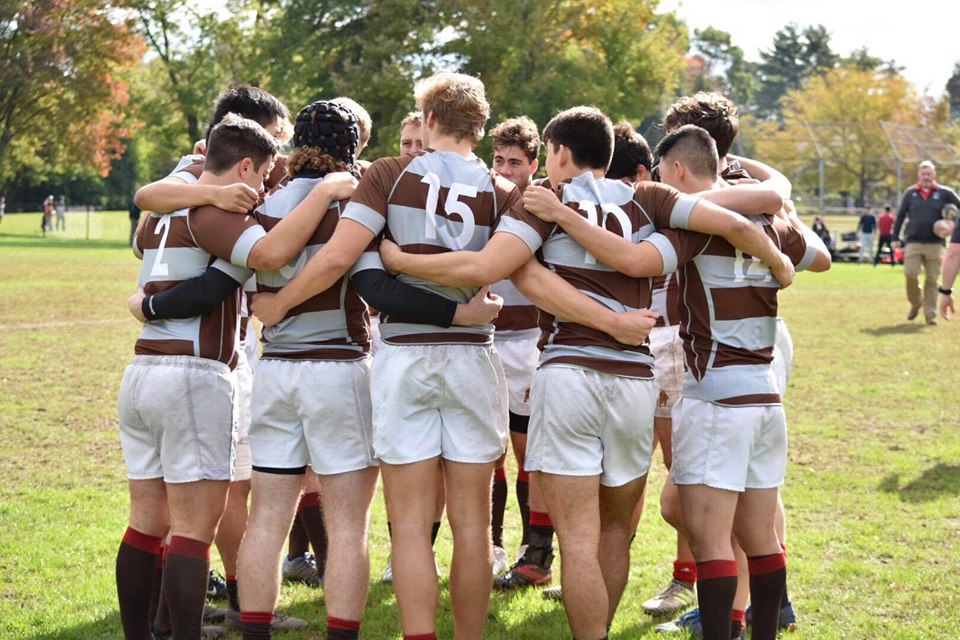 Columbia came into the Bear’s lair with high hopes but on a very warm, sunny and dry day Brown dashed any chance the Lion’s might have had. This writer has seen a marked improvement in teamwork and support which came together in the second half today. The starting XV had but 4 seniors and behind this team is bench that provides able support.

The first half of the match was played almost exclusively in the Columbia half of the field. Brown scored 4 tries with the dependable captain and center, Alex Ogilvy, converting three for a 26-0 first half lead. Brown was dominant but not in their “groove”.

Number 8, Jae Kim had a terrific scoring day and lead off the match, taking a pass from scrum half Pete Smith who had made a clean break from a ruck for a Brown lead at 7 minutes that would not be overcome.
Jon Kim, fly half and younger brother of Jae, followed with perfectly executed chip kick ahead which Jon caught up with in goal and touched down for Brown’s second score. The forwards then won a five meter scrum with the ball moving to the wing, Christos Economos, for Brown’s third first half score. To end the first half, scrum half Pete Smith passed to R.J. Oris on the short side of ruck and R.J. beat the defender for the try.

In spite of the workmanlike job of the Brown team, there was still a sense of too much individuality and not a fully engaged team effort.

The second half, however, was almost a clinic, with backs and forwards passing freely, moving the ball to open space and attacking with creativity. Jae Kim was one beneficiary as he scored 3 second half tries and 4 for the match. One of those tries was the result of a kick ahead by brother Jon. Anther somewhat rare Brown try was scored by senior second row, Cameron Webster, who intercepted a Columbia kick ahead and ran 15 meters for a score.

The last and perhaps the most creative try of the match was the result of a penalty to Brown on the Columbia 5 meter line near touch. As the Columbia team prepared for a scrum or quick strike by Brown, captain Alex Ogilvy saw Jae Kim standing out at wing on the open side of the field. Alex drilled a kick ahead of Jae who walked into the in goal area with the ball and touched it down for Brown’s final try of the match, much to the surprise of both Columbia and the Brown sideline.

Due to a lack of front row experience on the Columbia side, the match was played with uncontested scrums. In spite of the passive scrums, the front row of Max Spurrell, Adam Eberle and Dan Archer were work horses around the field at rucks and on defense. Brown took advantage of the uncontested scrums to run several blind side plays with wing Hudson Lee scoring one try and passing to freshman center Pablo Lavilla for a try on another occasion.

Two scores illustrate teamwork on the day. From a scrum at about the Brown 22, the ball was sent to center R.J. Oris who, as the defense closed in, passed to supporting Sean Lumkong who passed to freshman fullback Lucas Tay for a 40 meter score.  Junior Sean Lumkong, who has been converted to the flanker position from the backline this year, is getting comfortable in his new role, and made several long breaks in the match. One 40 meter break was to the goal line where he was tackled but passed off to his supporting second row Austin Royer for a try. Terrific teamwork and a solid performance for Brown.