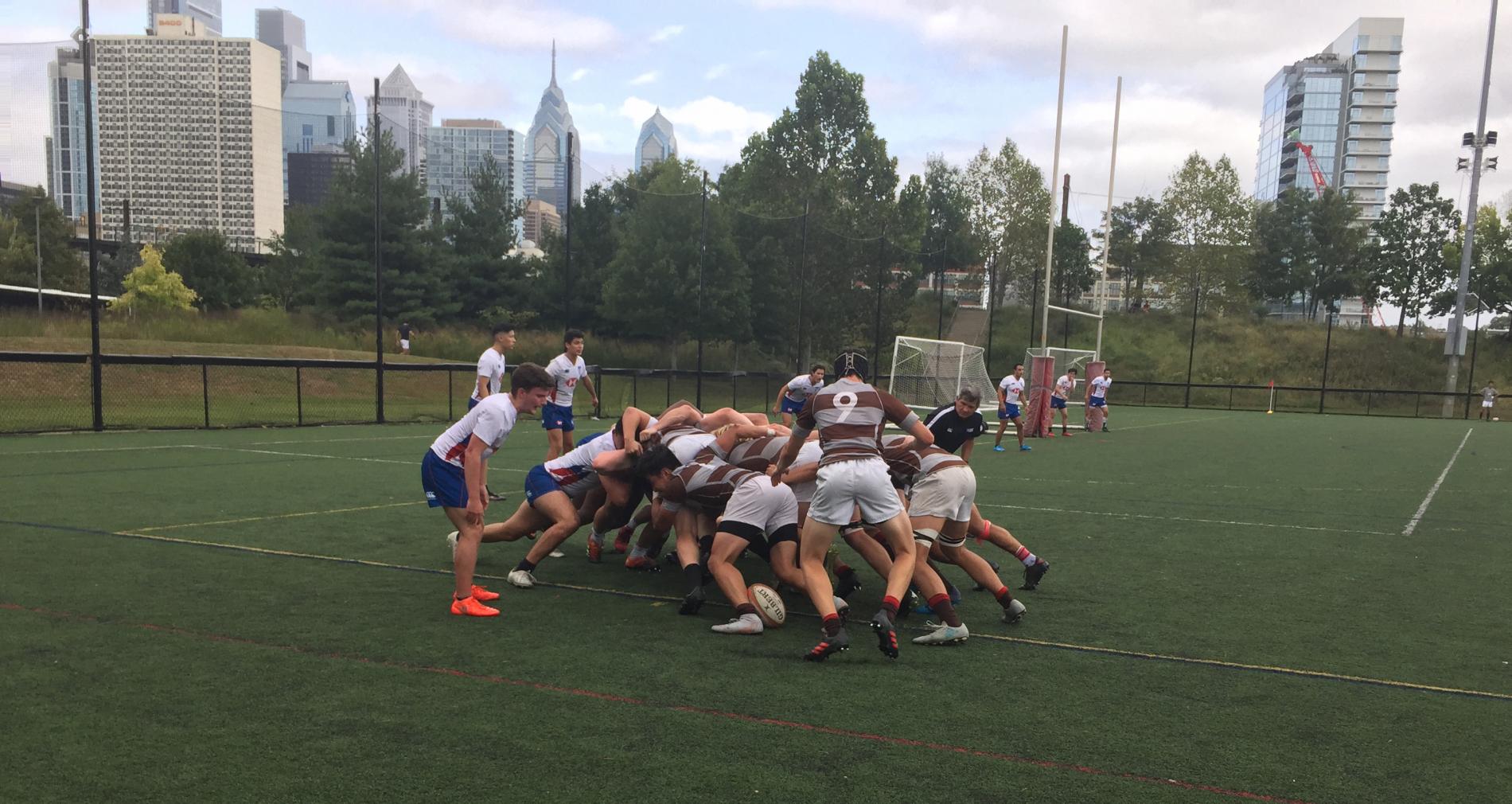 Brown on the attack in Penn's end, referee Tom Dugan looks on

For a third week in a row, Brown’s first XV came away victorious . This time, the victim was Ivy rival UPenn. Despite being the “City of Brotherly Love”, the Bears showed no love for the Quakers as they ran in 7 tries on the day conceding none. This was the last pre-conference outing before the league opener next week at home vs Columbia.

Due to field availability, the game was shortened to 60 minutes to allow for an abbreviated second side game to go off. It was nine minutes into the game when Brown drew first blood. Jon Kim broke a tackle and ran in for the try. Senior captain Ogilvy converted to notch up the first points on the day. Four minutes later, Penn were penalized in range of Ogilvy’s boot. Three more points put Brown in a comfortable start to the game.

Brown predominantly controlled possession for the entire first half however they failed to capitalize on a number of missed opportunities. There was a clear shape to their attack however time and time again, ball carriers were looking for passes that were not on, resulting in lost possession and a lack of go forward ball. A last scoring opportunity at the half went wayward as Brown knocked the ball on near the Penn goal line.

The second half was a different story. Brown continued to maintain possession through multiple phases of play. It was their ability to recycle ball quickly that provided attacking opportunities. The Brown scrum was once again dominant over their opponent. Penn saw themselves under pressure 6 minutes into the half as they were awarded a scrum on about the 5-meter line of their try zone. Consistent with the first half, once the put-in occurred, Penn were shunted back with a tremendous force. Bravely, their scrum-half pulled the ball out only to be tackled immediately by Peter Smith. Completely isolated and alone, there was nowhere else to go. As Smith took the player to ground, #8 Jae Kim quickly was over the top and onto the ball. Knowing the inevitable, the Penn player had to release the ball into Kim’s hands. It was an easy 5 points for the ex-captain of the side.

Two minutes later, Jon Kim hit junior Sean Lumkong on a hard line. A broken tackle saw Lumkong out pace one defender and step inside another for a 40-meter run and the addition of 5 more points. With the Ogilvy conversion good, and 20 minutes remaining, Brown had positioned themselves with a 22-point lead. With the wheels starting to come off, Penn found themselves in some trouble. Sure enough, at the 42-minute mark, Jon Kim took advantage of a gap in the defense. As he broke over the halfway line, the seas parted. 35 meters later he put the ball to his foot, pushing the ball past the last defender. A bobbled ball by their fullback saw the likes of both Kim(Jon) and Eberle bearing down. It would be Kim that would reap the rewards notching his second try of the day.

Not to be outdone by his younger brother, the elder Kim would have a brace of tries on the day. Jae’s second try would come at the 50th minute off another overpowering scrum. This one would be driven 10-meters out before the #8 would drive another nail into the coffin. Another 2 points for Ogilvy would add to his mounting points on the day.

With the clock winding down, Brown put up two more converted tries. The first was a hard line from scrum half Lucas Tay at the 54th minute. The last would be at full time. Four volleys of attack on the Penn goal line would send Eberle over and reward him for his hard work on the day. Ogilvy converted both to end the day with 13 points. The “City of Brotherly Love” certainly lived up to expectations for the Bears with the Kim brother’s combining for 20 of the Brown points.

Credit has to be given to first the entire team as their defensive pressure wreaked havoc on the men in blue. It was however the merciless work of the front row that robed the Quakers from any platform of attack and dismantled their opposition every time the two teams packed down. Penn never gave up. They had moments that put Brown under pressure. Unfortunately, Brown were a better side and took advantage of more opportunities.