Each of the eight Ivy League universities will be in attendance for the 41st annual 2009 Ivy League Rugby Championships. The tournament will be hosted by Yale University on April 25th and Columbia University on 26th, 2009.

The tournament fee is $325 per team. The fee covers field rental and preparation, referees, standby EMT, and all administrative costs. Match balls will be provided to each field, an All Ivy Team will be selected.

Per USARUGBY, Metropolitan New York Rugby Union, New England Rugby Football Union, Yale University and Columbia University policy, the 2009 Ivy League Rugby Tournament is an alcohol-free event.  We respectfully request that all teams abide by this policy and make every effort to inform fans and supporters of this requirement.

All players must be CIPP eligible and have undergraduate status at their University. Please indicate each player’s CIPP number on the separate roster form.

All players must have adequate medical insurance to be eligible to compete in the 2009 Ivy League Men’s Tournament.

Director’s table no later than 10:00 a.m. on Saturday, April 25th to confirm registration, roster, payment of the Tournament fee, and to receive field assignments.  Any additional information will be conveyed at that time.

kickoff for coin toss and instruction. All teams must play in assigned matches; failure to appear within 5 minutes of kick-off will result in disqualification and report to appropriate governing body.Breaker (in case of tie at end of regulation)

Sin-Bin- Sin bins will be for 5 minute periods based on shortened game schedules
Red-Card- Eliminates player from tournament; player will be reported to appropriate governing bodies for further disciplinary action.

To be coordinated by the New England Referee's Society (Sat) and Rugby Referee’s Society of York (Sun).

Athletic trainers will be on site at Baker Field on Sunday April 26 for tending to on-the-field injuries.  Each team will be responsible for its own trainer(s), should they choose to bring them, for taping and wrapping their players.

Seedings are based on the 2008 tournament finish. 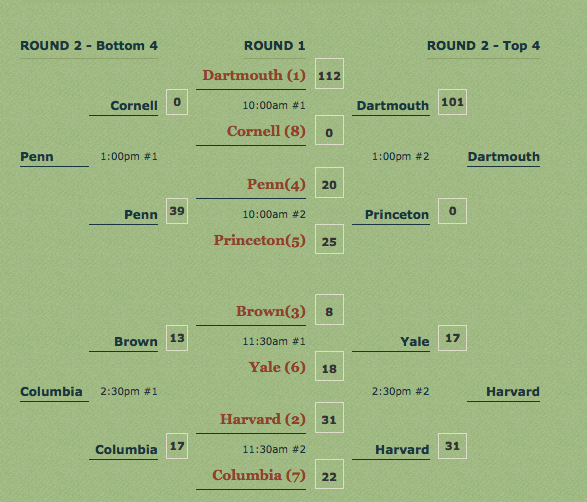 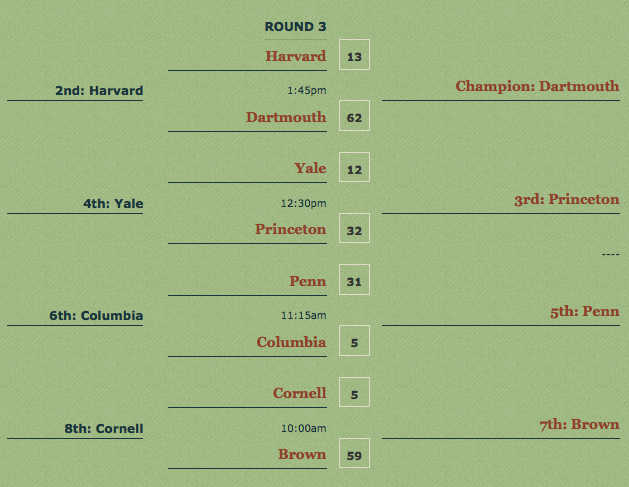