Harvard opened its season with a trip to the University of Pennsylvania. The game was Harvard’s first under the new Ivy League Fall Schedule, which promises both excellent competition and intense rivalries in the years to come.

“It is great the Ivy League has come together,” remarked Cornell Head Coach Tonee LaBar. “When I look back to the history of rugby, I think of the Ivy League… some old school, down‐and‐dirty knuckleheads pounding on each other.

Ivy League Kicks Off this Weekend

The Ivy League Rugby Tournament is now a full-fledged league. As a preview of this fall’s inaugural Ivy League Series Championship, e-RugbyNews.com asked each team to preview what we might expect on the field of play, and on campus.

For the first time in the history of Ivy League rugby, all eight ivy teams will compete in an established league. This weekend leads off with 8 games on the card. Four games Saturday; followed by four on Sunday. 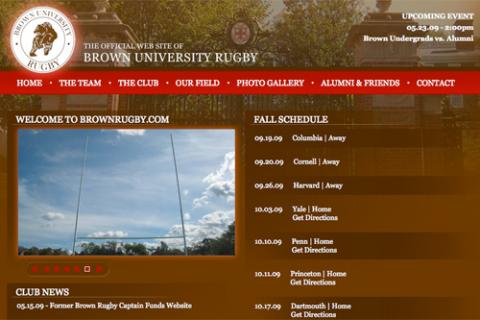 When I ran into former Brown captain, Michael Bernstein ’82 at a Red Sox game last summer, we hadn’t seen each other since he had graduated. Mike wanted an update on the team and asked several times what Brown rugby needed.

Michael's request was timely as our Web site had been dormant and ignored for years and we had received some recent alumni criticism for having the worst site in the Ivy League. We can debate whose was the worst, but there is no debating that we needed a new look. Well, no more!

The Brown women finished the year ranked #3 in Division 1 and 6 Brown players were named to the US All American squad.

US All American Squad First Team Andi Payne ‘10, loosehead prop Second Team Adria Orr ‘09 at flanker Annalisa Wilde ‘11 at lock Alex Hartley ‘10 at center Ploi Flynn ‘09 at wing In addition flanker and team captain Nina Safane was recently named to the US All American team that is assembling in Little Rock next week.

A long and inspiring season came to an end yesterday as Stanford pulled away with 10 minutes left to beat Brown in the national semi-final. The match was played in Steuber Stadium in front of a large and loud BROWN crowd! Alums from the bay area and families of players filled the Brown side and cheered themselves hoarse over he course of a very exciting match.

Led by wing Chris Downer’s three tries, Dartmouth College won the 2009 Ivy League Rugby Championship with a 62-13 win over Harvard in the final. Although the Harvard match was a blowout, it was the closest any team came, as Dartmouth outscored its three opponents by the combined tally of 275-13.